Properties of the Semi-Precious Stones.

I have complied a list of the semi precious stones I use in my silver jewellery designs and given some information on each one. The colours and vibrancy of the stones are so hard to capture in a photo but rest assured that the stones are beautiful quality and look naturally stunning. 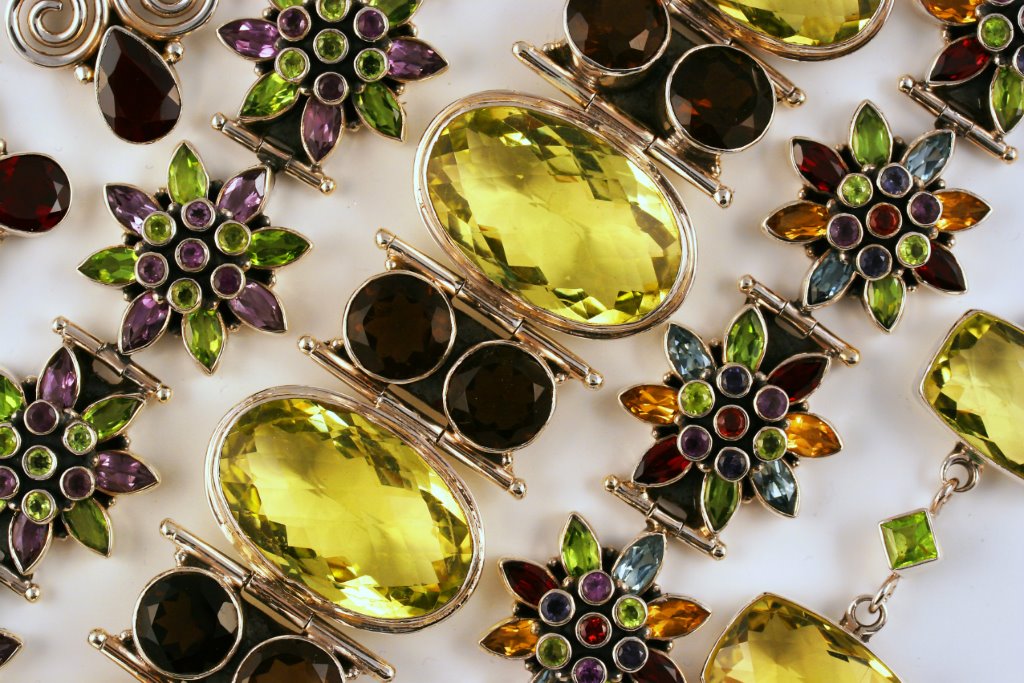 AMETHYST- the birthstone for February

Amethyst was named after the Greek mythological maiden who was turned to stone by the God Dionysus. It is the most valuable form of quartz. Amethyst ranges in shades of purple from pale lavender/lilac to a deep intense purple. The purple colour comes from the existence of manganese in clear quartz. The presence of iron in certain quantities determines the comparative intensity of its colour.

Amethyst ranges in transparency from transparent to almost translucent.

It is mined in Brazil, Uruguay, Bolivia and Argentina, Australia, Zambia, Namibia and other African countries.

Amethyst is believed to increase intelligence, ability to solve problems and spirituality.

The name Topaz is probably derived from the Island of Topazos, in the Red Sea.

Topaz is a mineral belonging to the silicate group. True topaz may be yellow, gold, pink, blue, green, mauve or red. It is translucent.

Topaz is thought to bring strength, wisdom and courage and the Romans thought it could help one avoid poisons.

CARNELIAN - the birthstone for July

Carnelian is probably named after the colour of the Kornel cherry because of its similar colour. It is a brownish red to orange colour and translucent to opaque.

Carnelian is found in Brazil, India and Uruguay.

It is said to provide harmony and peace.

Chalcedony is probably named after an ancient town on the Bosporus and is considered to be a sacred stone by the Native American Indians. It comes from Brazil, India, Madagascar, Namibia, Zimbabwe, Sri Lanka, Uruguay and the United States.

Chalcedony is a crypto-crystalline variety of quartz and includes the agate and jasper families. It is a finely crystallized or fibrous quartz that forms rounded crusts, rinds, or stalactites in volcanic and sedimentary rocks. Chalcedony, agates, jaspers, bloodstone, carnelian, onyx, and chrysoprase all make up the chalcedony gemstones.

Chalcedony’s actual colour is bluish-white-grey. It can have white streaks. It is dull, translucent and consists of microscopic fibres parallel to each other. Chalcedony is brittle, scratches easily and is damaged by chemicals and high temperatures.

CITRINE - the birthstone for November

The name Citrine is derived from the French word citron ‘lemon’. Citrine and Smoky Quartz are the birthstones for November.

Citrine ranges from light to dark yellow, gold-brown. The yellow colour is from the presence of iron. It is a transparent stone. Citrine is brittle and is easily scratched. Its colour is changed permanently if left in the sun or heat.

Citrine comes from Brazil, Madagascar, United States, Argentina, Burma, Namibia, Russia, Scotland and Spain. It is a gemstone which has been used in Greece since the Hellenistic period (end of the 4th to the end of the 1st century B.C.)

GARNET - the birthstone for January

Garnet derives its name from the ancient Greeks because the colour reminded them of the pomegranate seed or granatum.

The garnet group includes a group of minerals that have been used since the Bronze Age as gemstones and abrasives.

Garnet can range in colour from the common deep reds to bright orange and lime greens.Most are translucent, although they may range from transparent to nearly opaque.

Garnet is believed to improve consistency, perseverance and good health. According to legend, Garnet protects the wearer from nightmares and prevents depression.

Iolite derives its name from the Greek word ‘los’ for violet.

Iolite has different colours in different directions within the crystal. It is blue/violet and it is transparent to translucent.

It is believed that Iolite will aid you to open your third eye and utilize its abilities as well as helping to bring the things you desire into your life.

Labradorite is named after Labrador in Canada where it is found. The other main countries where Labradorite is found are Finland and the USA.

Labradorite, also known as Spectrolite, is a Feldspar mineral. Labradorite is pale green, blue, colourless, grey-white with iridescent blue green or gold flashes. It is transparent to opaque.

It is believed Labradorite guards against diseases and brings good fortune, strength and perseverance.

LAPIS LAZULI - the birthstone for September

Lapis is the Arabic and Latin word for blue stone. It is made up of several minerals and is considered itself not to be a mineral but a rock. The finest lapis is found in Afghanistan and it also comes from Angola, Burma, Pakistan, California, Colorado, Canada, Australia, Madagascar, Mexico, Russia and the United States.

Its colour ranges from lazur blue to greenish blue to denim blue with white/gold inclusions. Its colour is permanently damaged if left in the sun. Lapis is sensitive to acids and alkalis and should be removed during household work.

Lapis was prized highly and used in prehistoric times for jewellery and was inlaid in wall panels and columns and displayed in palaces and churches. It was ground into a pigment for use in cosmetics and paintings.

Lapis is believed to provide strength, purity and courage.

MOONSTONE - the birthstone for June

The name is derived from its white shimmer – moonshine. It is a potassium feldspar of the orthoclase species and belongs to the feldspar mineral family.  Moonstone and Pearl are the bithstones for June.

Moonstone is colourless, yellow, brown, green or pink but the most popular has a bluey white sheen. It is a fluorescent stone.

It is said that Moonstone brings good fortune, happiness and peacefulness and promotes digestion.

Click to see our Mother of Pearl Silver Jewelry.

Mother of pearl is not a semi- precious gemstone. It is Nacre (calcium carbonate) produced by some molluscs and oysters as an inner shell layer.

It is bluey/green/silver and is iridescent.

It commonly comes from Asia, the United States, Europe and Japan.

ONYX - the birthstone for December

The name Onyx is derived from the Greek word meaning veined gem which only applies to the banded agate variety of onyx. It is a chalcedony quartz that occurs in bands of different colours.

Originally all colours of chalcedony including black, white, brown, yellow and green were called onyx, but black onyx became shortened to onyx and has taken over the name. Solid black onyx is totally opaque.

It is said to bring happiness and intuition to the wearer.

PEARL - another birthstone for June

Pearls are not gemstones. They are created by oysters and molluscs when a foreign object (eg. grain of sand) gets into their shell. To defend itself, the oyster will start producing nacre (calcium carbonate) which coats the object in layers. These build up and result in a pearl over a period of years. Pearl and Moonstone are the birthstones for June.

Most pearls on the market are cultured. These are formed by inserting a foreign object into the tissue of an oyster or mollusc and then a pearl is created in the same way as in nature.

Pearl farmers can add drops of dye as the pearl grows to make a coloured pearl. The most common colours of pearl are white, pink, blue, purple, red, green, lilac and black. Round, blister and mabe pearls can all be cultured.

Pearls are grown in Japan, Tahiti and Australia.

PERIDOT - the birthstone for August

The name peridot is probably from the Arabic word Faridat (gem). The name commonly used in mineralogy is olivine. It was brought to central Europe by crusaders in the middle ages and used for ecclesiastical purposes. Peridot was mined on St John’s Island for more than 3000 years and is mentioned in the bible under the name of chrysolite.

Peridot is a gem variety of the olivine mineral group. The green colour depends on the amount of ferrous iron present. It ranges in colour from yellow-green, olive green, yellow-brown, to brownish. It is transparent.

It is said to promote health, wealth and sleep.

ROSE QUARTZ - another birthstone for January

Its name is derived from its colour. It is a quartz and is pink to rose red in colour which can fade if left in the sun. The colour is considered to be due to trace amounts of titanium, iron, or manganese. It is opaque to translucent.

It is said to promote peace, happiness, fidelity and love.

Rutilated Quartz gets its name from the needle-like strands of Rutile that are embedded in the quartz crystal in the form of inclusions. Rutile derives its name from the Latin word Rutilus or red due to the deep red colour observed in some specimens. Rutile is a mineral composed of titanium dioxide.

Rutilated quartz is transparent rock crystal with golden needles of rutile within it so that it looks as if it is filled with gold fibres. These inclusions are sometimes called Venus hair.

It is believed to bolster the immune system and to help reduce fears, phobias and anxiety.

SMOKY QUARTZ - another birthstone for November

Quartz is the most common mineral on the planet. It makes up over 10% of the Earth’s crust. The name Quartz comes from the Slavic word for 'hard’. Smoky quartz is named after its smoky colour. It varies from brown to black to smoky grey in colour. Smoky Quartz and Citrine are the birthstones for November.

Smoky Quartz is the national gem of Scotland and believed to have been considered sacred by the Druids. Cairngorm is a variety that comes from the Cairngorm Mountains in Scotland. They tend to be yellow-brown and grey-brown.

Smoky Quartz is found in Brazil, which is supposed to be the world's largest supplier, Colorado, the Swiss Alps and Scotland.

It is said to keep the wearer grounded and to protect the wearer from being affected by the negative energy of others.

TURQUOISE - the birthstone for December

The name Turquoise was derived around the 16th century from the French language either from the word for Turkish ‘Turquois’ because the trade route bringing it to Europe came via Turkey or from the word for dark-blue stone ‘pierre turquin’. Turquoise is a mineral of aluminium and copper and has been used since before 4000BC.

It is translucent to opaque and can be sky blue, blue green, apple green (with white streaks).It often has brown, dark grey or black veins which are called turquoise matrix. In the Victorian period sky blue was the most popular colour. A negative change in colour happens if it is left in sunlight or is in contact with sweat, oils or perfumes.

The best turquoise is found in North East Iran and it also comes from Afghanistan, Argentina, Australia, Brazil, China, Israel, Mexico, Tanzania and the United States.

Turquoise is said to give the wearer courage, peace, protection and luck.